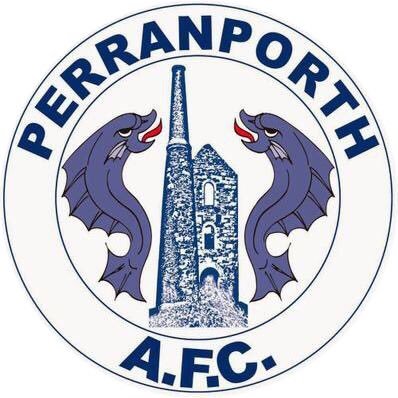 In the year 1904, a strong Perranporth team had an ambition to win the Dunn Cup in the Mining Division League, but it was not until the season 1906-7 that this ambition was realised. They were a stalwart bunch of players with such well known names as Tamblyn, Mitchell, Hawkey, Benny, Chudleigh and Cocking, that are still familiar in Perranporth today. It was not until 1921-22 that the Dunn Cup came to Perranporth again, and once more the names Mitchell and Chudleigh, together with Holmes, Kimber and Penna, some of whom played for the County. The Dunn Cup did not come the way of Perranporth again even though such names as Art Coward, Ginger Glanville, Archie Richards and Jack Dyer were still wearing the Perranporth Colours.

Then the war came and football came to a standstill, some local lads, and servicemen did play some friendly games. After the war a meeting was called and the prospect of starting an official Perranporth team was discussed, a ground was promised, new goal posts were made by committee members and Perranporth was on the road again, with Coward and Glanville still playing, an then by season 1952-3 they shared the Dunn Cup with Helston. By 1955 the ground was at Trevellance Farm, Bolingey, the Chairman was Fergie Bown, Treasurer R. Kent and joint Secs J.D Bice and F. Trebilcock.

Alas by 1956, owing to a lack of finance, the Club closed until 1968, when Ron Good, who kept the Newsagent and General Shop, approached me Vic Coulson to call a meeting to try and reform the club. A meeting was held in the Memorial hall annex, and after having a grand sum of Â£3.10s handed to me by a very young Peter Dodson, I was made the Club Treasurer, and left the meeting with a grand sum of Â£61.00. The late Chrissie Bebbington was made President, a Mr Austin was Secretary, but alas after one week he collapsed and died of a Heart Attack. A trophy was provided by Chrissie to be handed to the one who does the most for the Club. This trophy is here to this day.

After we entered the Truro and district Sunday League, for two years we enjoyed many matches at Penhale Army Camp, which culminated with us defeating Bullers Arms team 6 – 4, a team which had been undefeated for two years. We next re-entered the Mining Division operating two teams, which was made possible by the late councillor Ted Rilstone, who had decided that a pitch was available at Cligga, an thanks to the efforts of farmer Jeff Tredinnick, who later became our Chairman, he cut all the grass and brambles, an a pitch was made. We purchased a wooden building, which was once a roadside cafe on the Redruth by-pass, rebuilt it, provided showers and had many happy years there.

The Spring Company vacated their works, so after disussion with the Parish Council we developed our own Social Club. This was a tremendous effort, our thanks had to go to Paul Bice, our Chairman, Colin Chase for all his efforts with the plans and building, many of our players, Ron Good for building the Bar and after I had spent many hours decorating we were open.

Perhaps at this time our greatest day was to play the full Plymouth Argyle first team at Cligga. A day that saw us defeated 10 – 3 with great goals from Rod Brooks and Eddie Watkins, this was followed by a Dinner Dance at the Apollo Club.

Our next move was to place our team in the Falmouth and Helston League, and over the years many memorable matches were played at Cligga and we were a very happy club.

The next great event was the knowledge that the Ponsmere Valley was ready for us. We had hard thoughts of leaving Cligga, but we set up at Ponsmere Valley. I was elected to the committee that eventually built the Social Club, and when it was built many items were taken from our Social Club at Cligga, and are still there to this day.

Little did we think that the Club would close down and when it did, once again we had no dressing room. We had enjoyed many years in the Falmouth and Helston league and perhaps our greatest time was 1990-91 season, after defeating Penryn in our semi final we defeated Constantine 3 – 1, to fetch the Lockhart Cup to Perranporth. By the 1992-3 we were once again raising money to build new dressing rooms, which we eventually succeeded in completing in 1992. We have many people to thank for their help, our present Chairman Mike Trevethan, our Manager Glenn Mather, Sec. Dave Millward, and especially all our sponsors over the years, Westcountry Automatics, Intertile, St. Agnes, Ponsmere Hotel, Waterside Kitchens, Perran Associates and many local tradesman who have us cash donations.

This year I have completed twenty five years with this Club, some years sad but many happy moments. We hope to now really settle at the Ponsmere Valley and hope that our Parish Council will support us as we feel that we cannot move again. We want to make the Valley the home of Perran Sport, and we congratulate the Rugby Club on their great season this year.

Perranporth AFC were promoted into senior football in 2004 after a dramatic end to the season in the FHFL Division 1, in which they also reached the Junior Cup Final, narrowly losing to Godolphin, after 3 years in the Combo they were promoted in record breaking style to the SWPL Division 1 West, they also won the Combo League Cup and Evely Cup. In their first season they won the SWPL Division 1 West title, after 6 years they chose to re-enter into the Combo. In the 2016/17 season they won the Supplementary Cup after Lee Denton and Justin Miles took the reigns towards the end of the season. The 2017/18 season saw them win the Combination League title for the first time in 10 years and they were unfortunate to not win the League Cup after losing to St. Day in the final.